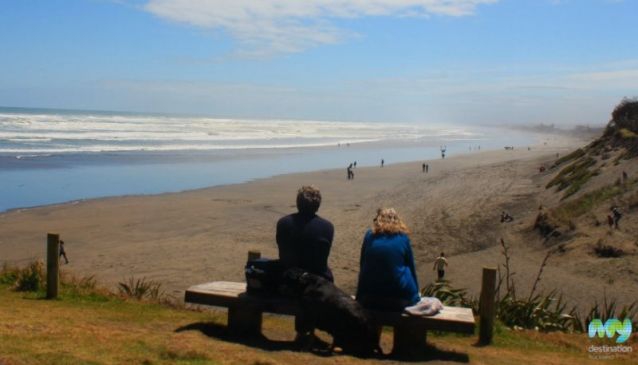 Muriwai Beach is one of the great beaches in the Auckland region. Situated on the wild and untamed West Coast of Auckland, the large flat and black sandy beach is an impressive sight.

Surfers are a common sight, drawn to the favourable conditions of the sea while flying high above, paragliders are drawn to the equally favourable south-westerly winds surrounding the coastline. The Muriwai surf School is located just past the Sand Dunz Beach Cafe, and offers surfing tuition and the option to hire a wetsuit and a surfboard.

Close to the beach is the Muriwai Gannet Colony which is home to over a thousand pair of gannets who return to the area each year from Australia, between September and April.  At the colony there is car park and a short walking trail that leads to a couple of viewing platforms that allows visitors close up views of the colony and rugged coastline.

The Hilary Trail, a four day trail that takes trampers along the coastline from the Waitakere Ranges Regional Park passes through Muriwai.

Muriwai Beach also brings out the anglers, who set up under along the rocks to 'catch a bite', although it can be dangerous in many spots.